We’re also introducing our new Facebook Live and Podcast to you, Weekly Woman! We’ve started a new Podcast and Facebook Live event where we interview women making strides in their community each week! We’ve recently had on an amazing entrepreneur and podcast maker, an actress/activist, and a mom and bar manager!

Do you know someone to nominate? Just shoot me an email at alice@jubilance.com with their contact information.

Last week, I sat down with Alexandra Merritt Mathews to talk about her life as an actress in New York City, growing up in an all female household in Buffalo, and her passion for female equality! Here’s a selected excerpt from our full interview.

Alice: If we can get to get to know who you are. Where are you’re from and what made you move here to New York City?

Alexandra: Okay. Well, I am originally from Buffalo, New York. I grew up there and then I went to college for undergrad at the University of Chicago. So I moved to Chicago for college. Then my senior year, I ended up applying to Graduate School and I got into a couple of schools in New York, so I moved here for graduate school.

Alice: What did you love most about Buffalo growing up there?

Alexandra: The people. The people in Buffalo are incredibly special. It’s called the City of Good Neighbors. That’s our slogan. It couldn’t be more true. It’s a very large city; I think a lot of people don’t realize it’s actually the second-largest city in New York other than New York City.

Alexandra: Yes. So yes, it’s the people and the food. [laughs]

Alice: Yes. Speaking of food, can you tell me about those buffalo chicken wings? Are they really better in Buffalo?

Alice: Who invented them?

Alexandra: Maria who is the wife of the people who own that bar. The restaurant invented them because they were running out of snacks at the bar and she just made something to sort of keep the people at the bar happy and drinking and she made these breaded chicken wings and the rest is history.

Alice: Can you talk about growing up in a household that was all females?

Alexandra: It is unusual, although, you know, I think by the time I was in middle school or high school, the statistics were, I want to say, something like 50 or 55% of people were being raised by single parents and mostly single moms. So while it felt unusual at times to be raised by a single mom, it actually wasn’t in the grand scheme of the statistics in the US and in the world. But my mom was a single mom, she was– and still is a lawyer and had a very tough schedule. I was very, very lucky that my grandparents served as basically extra parents. I had a team of people picking me up from school, taking me to dance class, getting me to my trombone lessons and back kind of thing. So it was a team effort, but definitely the two most influential people in my life were my mother and my grandmother and they were pretty amazing, strong women who always put education first and who taught me to compete in a man’s world.

Alice: That’s amazing to grow up with that.

Alexandra: It is. It’s funny, I think about people who grow up in a traditional family. You know, it’s strange for me to even think about it just because I have no frame of reference.

Alexandra: I have no frame of reference for what that’s like. But I think that it’s important to have role models in your life, whether they’re men or women who show you that working hard for what you want is the goal, right. That you should treat everyone with kindness and that you should work hard to achieve your goals. I think no matter if that person is a woman or a man, I think that’s the important message that you need. 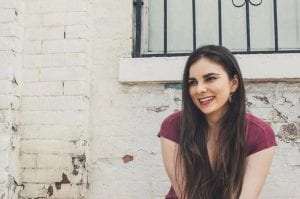 Alexandra loves Buffalo Wings and they’re the perfect option to take to a tail gate. Here’s a recipe from the OG Wings at the Anchor Bar! Try it this month!