Victoria Woodhull, the feminist you’ve never heard of but should know

Home/Lifestyle without PMS/Victoria Woodhull, the feminist you’ve never heard of but should know
Previous Next

Victoria Woodhull, the feminist you’ve never heard of but should know

Victoria Woodhull was the first woman to run for President of the United States in 1872. The seventh of ten children, she was born into a “Frontier Town” in Ohio in 1838. She had a turbulent childhood, with an abusive father and only three years of formal education. Her father was a known grifter and after insuring his farm, he burned it down to try to get the insurance money. The town discovered his arson and had a “benefit” to raise money to throw out the Woodhull’s from Ohio.

“Is it fair to treat a woman worse than a man, and then revile her because she is a woman?”

The family headed to New York where Victoria met her first husband, Canning Woodhull, a doctor who claimed higher social status than he actually had. They married when she turned 15, but soon after she learned that he was an alcoholic and womanizer. After having their two children, she divorced him and married Colonel James Harvey Blood who was the city auditor of St. Louis, Missouri.

Victoria began to believe in the idea of “Free Love,” which at that time meant the freedom for women to choose to divorce, marry, and have children on their timetable and when and how they wanted. Given her history with her first husband and father, she found that women needed a voice at the table. She advocated for women being the ones to initiate sex, as they were the ones that usually didn’t get a chance to say yes or no. She also said that women should be allowed to love when and how they wanted, for as long or as short as they wanted.

Pushing for women to have a voice, Victoria and her younger sister, Tennessee started the first female stock brokerage on Wall Street in 1870 with the assistance of Cornelius Vanderbilt. She helped advise Vanderbilt on selling his stocks and made him millions of dollars in deals. She and her sister were called the “Queens of Finance,” in the newspapers of the time.

“For a woman to consider a financial question was shuddered over as a profanity.”

On May 14th, 1870, Victoria and Tennessee started a newspaper with circulation of 20,000 at its height. The primary purpose was to help with Victoria’s bid for the presidency, but it soon became a huge game changer in the feminist scene. There were articles about short skirts, free love, sex education, suffrage, and even legal prostitution. It was the first to print the English Language translation of Karl Marx’s Communist Manifesto. What set the public reeling was when she exposed an affair a Preacher was having at the time, the newspaper was then considered debaucherous and they were arrested for circulating the obscene newspaper.

Woodhull went on to advocate for Women’s rights. In 1871 she testified on suffrage before the House Judiciary Committee claiming that women should already have the right to vote give that the 14th and 15th amendments already guarantee a persons right to vote.

“Suffrage is a common right of citizenship. Women have the right of suffrage. Logically it cannot be escaped.” 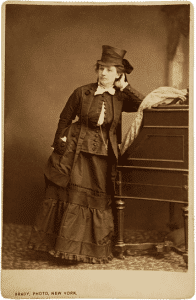 Then in 1872 she ran for the presidency with the new Equal Rights Party where they nominated former radical slave, Frederick Douglass to be her running mate for Vice President, even if he never acknowledged the nomination. But since she was arrested from her newspaper, she wasn’t allowed to even vote for herself for the presidency. She received no electoral votes.

In 1876, she divorced her second husband and she and her sister moved to England, at the urging of William Henry Vanderbilt, who paid them to leave the country. He thought that they might testify against Cornelius and his estate. There, she met a banker, Joseph Martin who she married.

“The women of the country have the power in their own hands, in spite of the law and the government being altogether of the male order.”